Let's set the record straight. You can't see the Great Wall of China from the moon. Your fingernails don't keep growing when you're dead. Shaving does not make hair grow back quicker or thicker. Chicken soup will not cure a cold. And a penny dropped from the top of the Empire State Building cannot kill a pedestrian below.

Like the so-called facts above, there are also things that many SWFL  small business owners think they know about advertising on Fort Myers radio that just aren't true.

Here are the five most common misconceptions followed by the truth.

1. Nobody Listens to The Radio Anymore. Media expert Doug Schoen wrote in Forbes, "You wouldn’t know it from all the media coverage focused on streaming video and streaming music, but recent Nielsen data shows radio actually has the most reach among American media consumers. 93% of adults listen to the radio each week as compared to 87% who watch TV, a substantive difference."

Last week in Southwest Florida, for instance, 807,219 adult consumers tuned-in to their favorite radio stations. This is significantly more than the 742,100 consumers reached by area TV stations or the 246,583 reached by local newspapers, or the 2956,232 that logged-on to a streaming audio site like Pandora or Spotify. 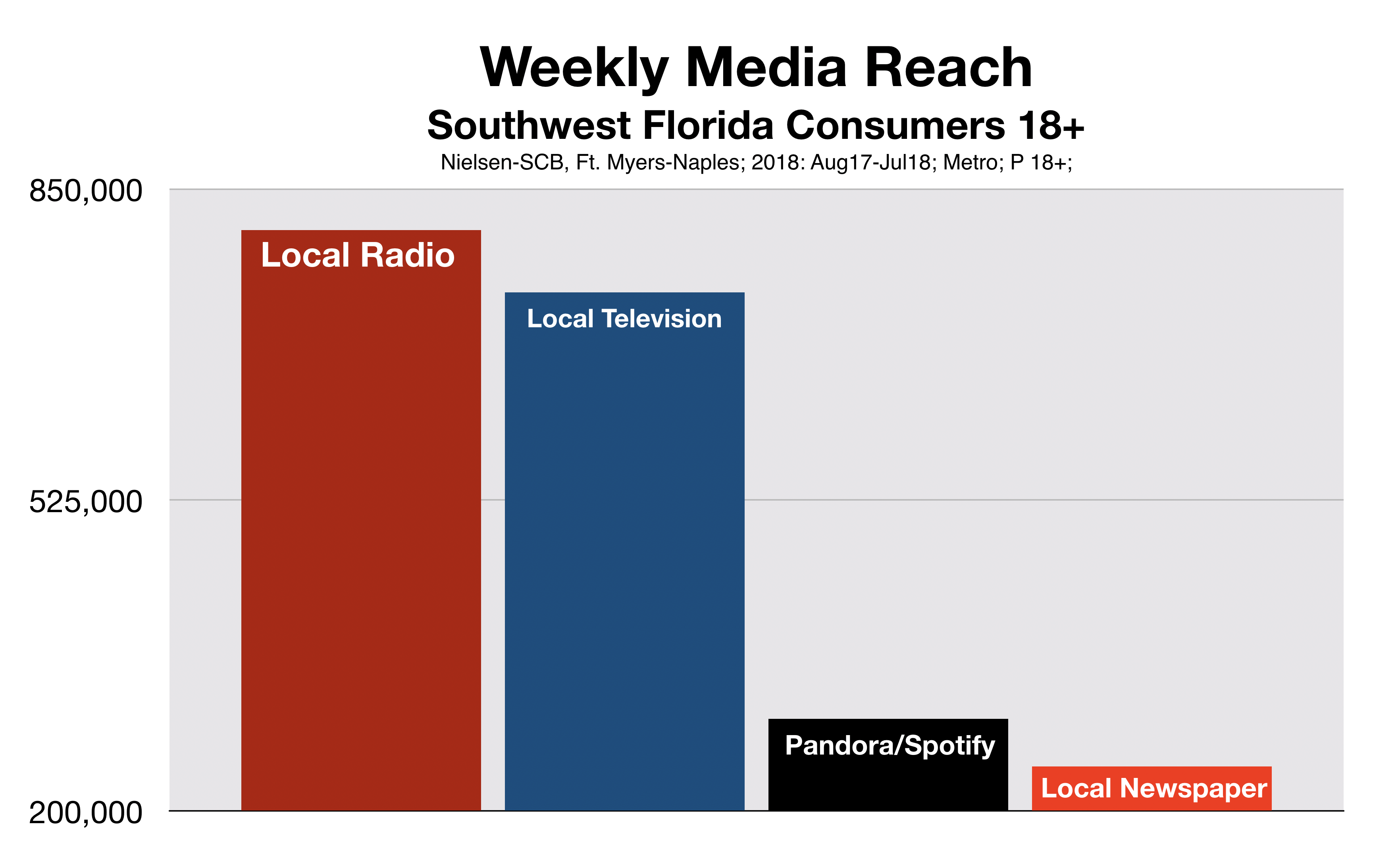 Radio's massive reach among consumers led Deloitte, the world's largest business consulting firm, to recommend that "radio should be a big part of the mix for those buying advertising."

"Radio advertising works for me," says Mr. King. "My commercial has been on every day for the past seven years. Advertising on Fort Myers radio helps me reach clients from Marco Island to Venice. No other media has that kind of coverage."

"I've tried newspaper advertising and phone book advertising, but it hasn't been successful," says Mr. King. "The reach and frequency I get from advertising on Fort Myers radio provide branding opportunities these other media can't."

2. Millennials Don't Listen To The Radio. Despite a proclivity for all things digital, significantly 95% of millennials tune-in to Fort Myers radio each week. This is substantially more than watch local TV or visit streaming audio sites such as Pandora or Spotify. 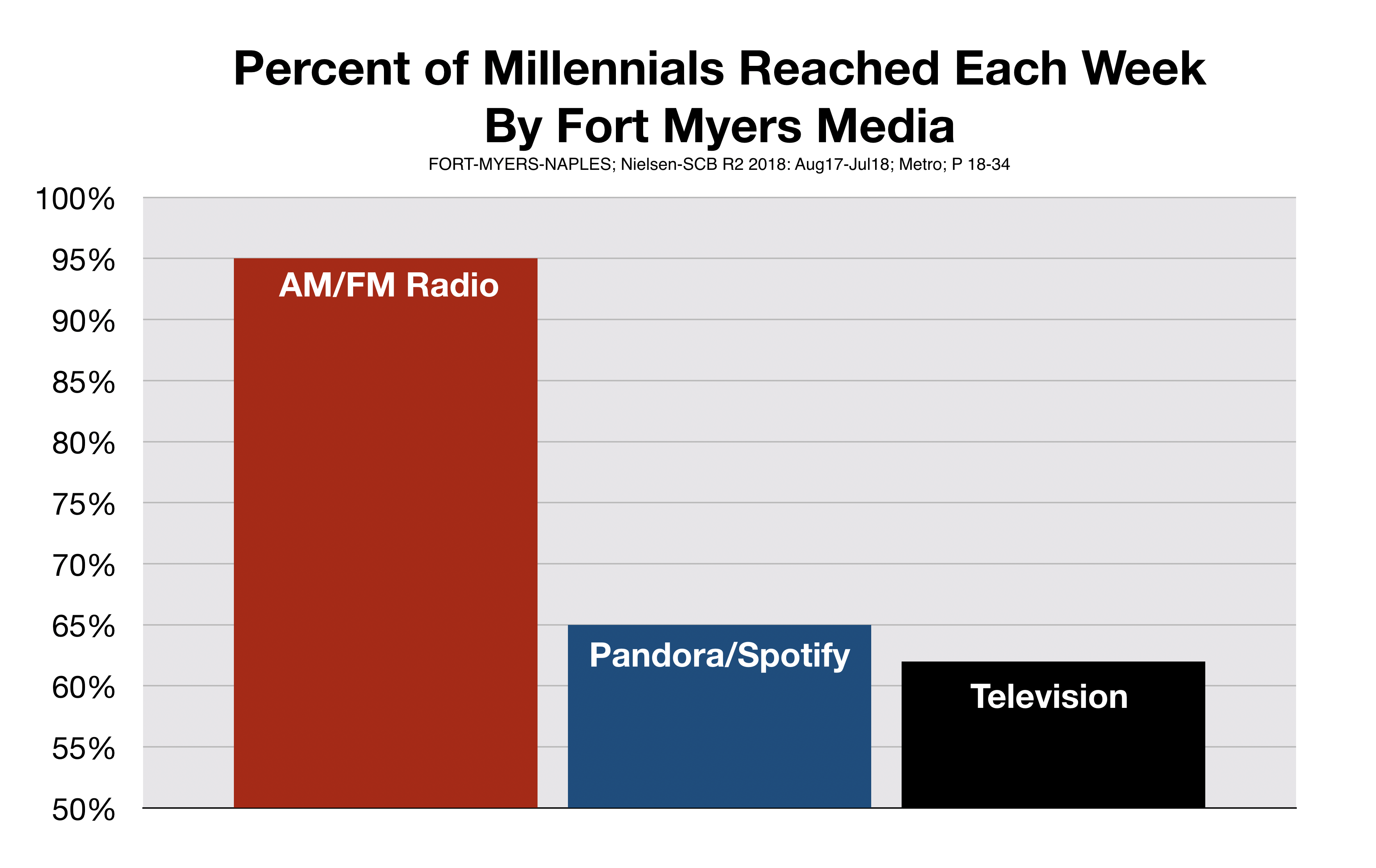 Where radio really delivered for Amazon was among millennials. Thirty-eight percent of this audience that was aware of Prime Day ads on the radio made a purchase during the event. Radio's ability to deliver customers was 18.7% better than online ads and a whopping 22.5% better than TV ads.

#3. Radio Commercial Needs To Be Heard 3 Times To Be Effective. This myth has its roots in 1890 when Herman Ebbinghaus, a German psychologist, conducted a series of memory experiments.

Dr, Ebbinghaus studied how many rehearsals were necessary for his test subjects to memorize a list of nonsense syllables.  Three seemed to be the magic number.

Flash forward to the mid-1960s.  Dr. Herman Krugaman, a public opinion researcher at General Electric was asked to develop a model for effective advertising frequency.

Based on the works of Dr. Ebbinghaus, Dr. Krugaman determined that for a commercial to be effective, it must attain three and only three, levels of psychological exposure among the target audience. Quickly, however, Krugman's model was misinterpreted by media buyers to suggest three media exposures were necessary to produce advertising results.

Krugman himself was dismissive of the "three exposure rule" propagated by the media buying community. He said, "There is a myth in the advertising world that viewers will forget your message if you don't repeat your advertising often enough. It is this myth that supports many large advertising expenditures...I would rather say the public comes closer to forgetting nothing they have seen [or heard]. They just put it out of their minds until and unless it has some use . . . and [then] the response to the commercial continues."

If three is not right, then how many times do consumers need to be exposed to before they make a purchase? Erwin Ephron, often considered to be the father of modern media planning, told Inside Media magazine, "Today serious students of advertising understand there is no formula answer to the effective frequency question. They believe most exposures are reminders so a single exposure, if relevant, can make the sale.”

A study conducted by Nielsen, confirms Mr. Ephron's advice. The study indicated that, in fact, a single exposure to a radio commercial could generate an increase in sales. The study goes on to demonstrate, however, that higher levels of frequency will create an exponentially greater lift to sales. The greatest lift came when consumers were exposed 7-plus times to an advertiser's message.

Bottom line: there is no science to support the three-frequency rule. The evidence indicates the more frequency...the better.

Jamie Layne, owner of Victory Layne Chevrolet in Fort Myers understands the value of utilizing a high-level of frequency to build her company's brand.

"Of all the media we have used over the years," she continues, "advertising on Fort Myers radio helps us reach the most people and gives the best frequency."

#4. Internet Advertising Provides Greater ROI Than Radio. Nielsen has conducted more than 20 studies on what type of return-on-investment a business can expect from its radio advertising. AdAge magazine describes the results of this research as "eye-popping".

The most recent Nielsen study revealed that a radio advertising campaign conducted by an auto-aftermarket retailer generated $21.00 of incremental sales for every $1.00 invested. On average, the results of all these studies indicate a 10-time return on investment. 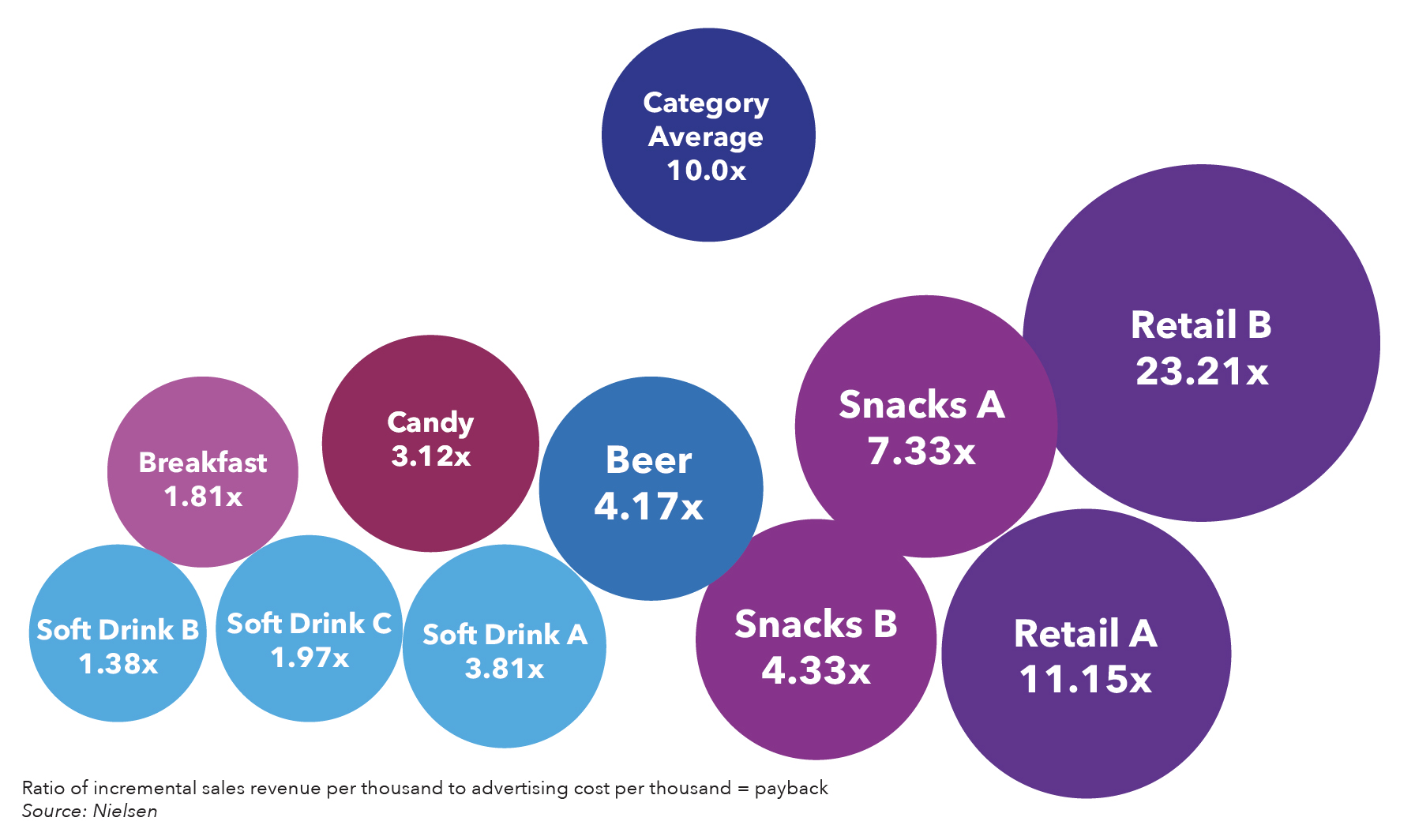 According to AdAge, these findings indicate that advertisers can expect higher returns on investment from radio than TV, digital, or social media. 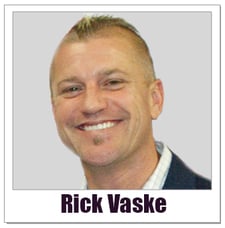 Rick Vaske is the Director of Operations for Advance Solar & Energy. His company is a leader in solar electric and heating solutions.

"Five years ago, we did not have much competition for solar," says Mr. Vaske. "There were only 180 solar dealers in the entire state of Florida. But, as the price of panels fell and tax incentives have improved, just about anybody can now afford to power their homes with solar. Needless to say, we soon had more than 400 competitors. It was like a gold rush."

"During that time, however," Mr. Vaske continues, "we were able to stand apart from the competition and grow our company by 50%. Advertising on Fort Myers radio helped us do that."

"Advertising on Fort Myers radio provides us with an excellent return-on-investment (ROI)," says Mr. Vaske. "We track every lead that comes in, and we know our cost per lead for radio is lower than almost everything else we do."

#5. People Only Listen To Radio During Drive Times. Radio stations broadcast 24 hours a day for a reason: people listen all day, every day.

The chart below from Nielsen indicates that although listening to Fort Myers radio peaks Monday-Friday between 6:00am and 7:00pm, there is a significant audience after dark, overnights, and on weekends.

% of Consumers Reached By Fort Myers Radio By Time Of Day 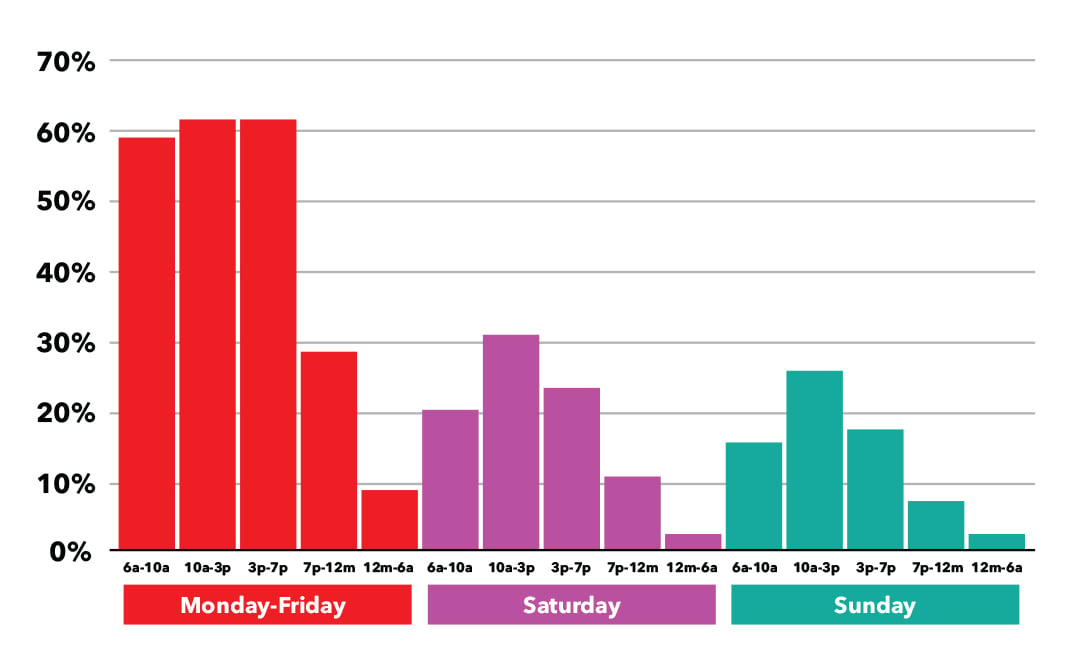 During certain times of day, the demand to purchase commercials is greater than the supply. This, then, drives up the cost of advertising during those times. The commercial time in most demand is during the peak listening times. Because of this, some SWFL small business owners believed they couldn't afford radio.

For businesses with limited advertising budgets, using fewer ads during prime time and placing more commercials during the lower demand times of the week can prove to be both effective and more cost-efficient. This is because almost 8 out of 10 consumers who tune-in to radio during prime time also listen during non-peak times. 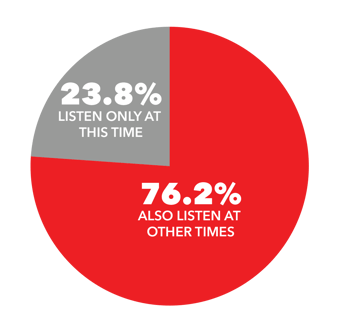