Small business owners have been advertising on Fort Myers radio since the first station, WFTM, went on the air in 1940.  By almost every metric, the medium remains the best way to successfully market goods and services to local consumers.

Before Southwest Florida small businesses finalize their marketing plans for this year, here are five facts they should know about radio advertising.

1. Fort Myers Radio Reaches More Consumers Than All Other Media

Last week, 841,492 adults tuned-in to a Fort Myers radio station. That is significantly more than watched local TV, read a newspaper, engaged with social media, or used a streaming audio site like Pandora and Spotify.

2. Fort Myers Radio Reaches Consumers of All Ages Including Millennials

Radio reaches the most SWFL consumers of all ages. This is even true among millennials, a generation who grew up with an abundance of media options. 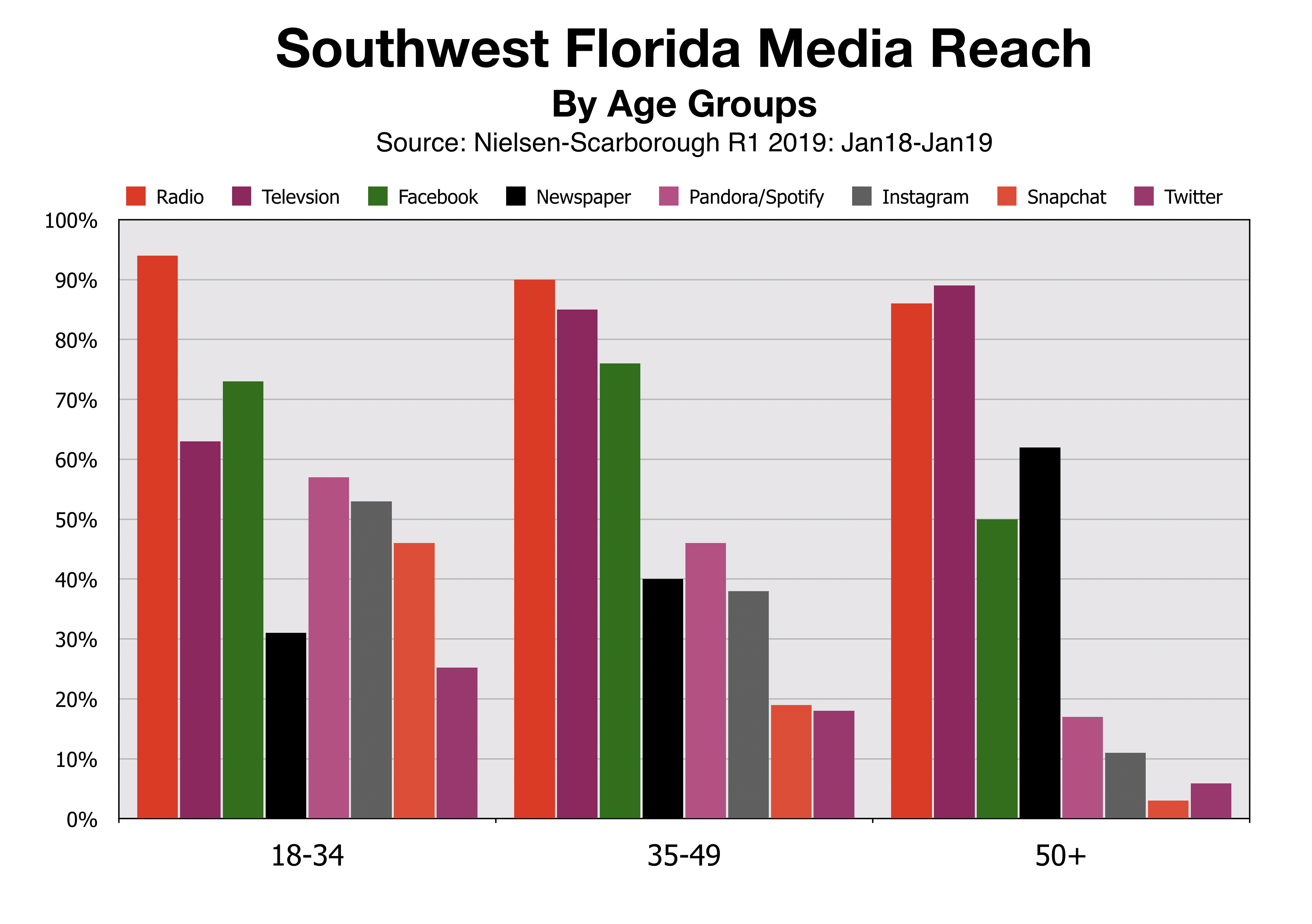 Adult consumers in Fort Myers, spend, on average, about 2 hours per day listening to local radio stations. This number has stayed remarkably consistent for many years despite the deluge of new media options.

How can this be? The chart below indicates that, nationally, consumers have made more time in their day for all media, including local radio. 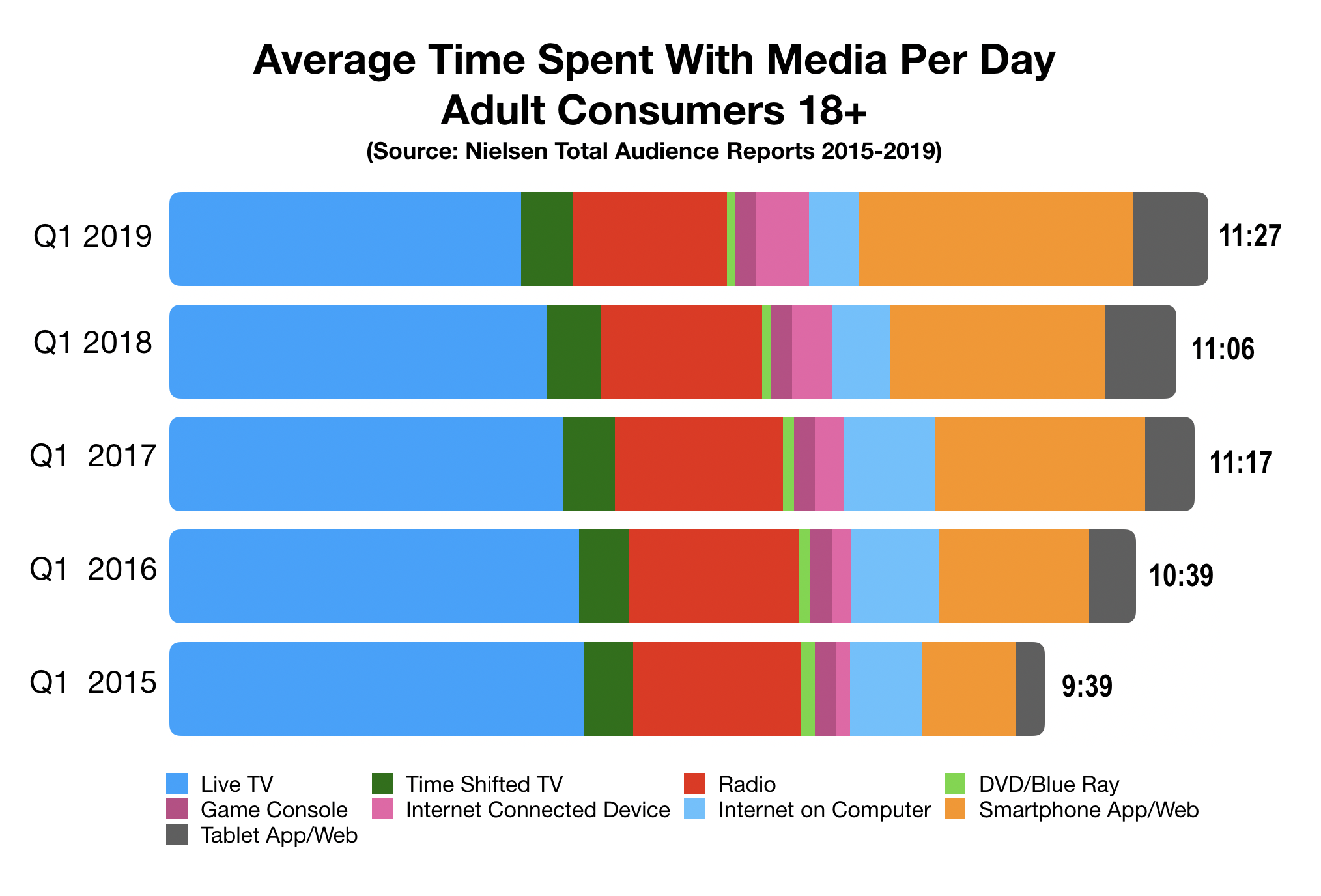 Black and Hispanic consumers represent a sizable portion of Southwest Florida. According to Nielsen, these two populations comprise 24% of the adult population and will contribute $7.4 billion in spending to the local economy.

To claim a share of this very lucrative market requires small business owners to advertise. By any metric, local radio is the best way to reach Black and Hispanic consumers.

For instance, last week, 91% of Black and Hispanic consumers tuned-in to a Fort Myers radio station. This is considerably more than watched local TV, read a newspaper, used social media, or logged-in to a streaming audio site. 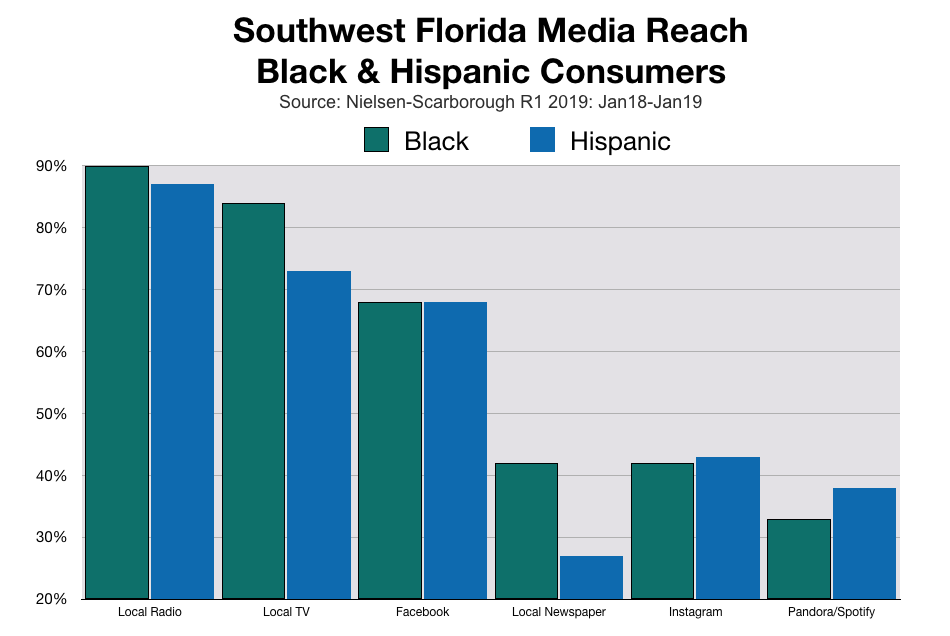 5. Fort Myers Radio Reaches More Consumers At Every Income Level Than All Other Media

Reaching SWFL consumers with money to spend is critical to the success of most advertising campaigns.

Regardless of the product or service a local small business sells, local radio has the greatest reach among people who can afford to make a purchase.

These 5 facts, affirm why Deloitte, the world's largest business consulting firm, recommends that "radio advertising should be a big part of the mix for those buying advertising."

"Radio’s weekly reach, the percentage of people who listen to radio at least once per week, has been remarkably stable in the United States," says Deloitte. "Not only has reach hovered around 94% for the last few years, but that number is essentially unchanged from the 94.9% percent figure in spring 2001 when Apple introduced the iPod."