Reclaim 'Top Of Mind' When Your SWFL Small Business Re-Opens

Business was booming in Southwest Florida. Then it was not.

Before the chaos brought on by Coronavirus, it had been predicted, based on estimates from the National Retail Federation, SWFL consumers would spend 4.1% more in 2020 than they did in 2019. On April 3, however, when Florida's Governor shut down the state, the expectations of growth for many small business owners were replaced with fights for survival.

As the state prepares to reopen, Fort Myers-Naples area small businesses will learn that turning the lights back on and hanging out the welcome sign might not be enough to bring even the most loyal customers back.

Some customers will not return because of personal safety concerns. Other customers may have discovered alternative sources to purchase goods and services.

More likely, though, customers will not come back because a business has lost a valued parcel of real estate: the position at the top of a customer's mind. This is the place where purchase decisions are made.

There is a way to regain top-of-mind status. First, though, it's important to understand why a business can be forgotten so quickly.

Hermann Ebbinghaus was a German psychologist who, during the 19th century, pioneered the experimental study of memory. He is most famous for the discovery of the Memory Curve. His curve demonstrates how rapidly the ability to recall information erodes over time.

The curve indicates that unless people make a concerted effort to remember, the ability to recall information drops by 40% after just 20 minutes. At the end of one day, recall drops to only about 25%. Quickly after that, recall diminishes into oblivion.

The reason consumers can forget so quickly is a simple case of numbers.

Every second, most people are exposed to 11,000,000 pieces of data. A consumer's brain, however, is only capable of dealing with about 50 pieces of this data at a time. Consequently, a consumer forgets approximately 10,999,950 things every second. To put this in total perspective, multiply that number by the 2.6 million seconds many SWFL businesses have been closed.

Simply put, over the past 30 days, a small business has probably been exiled to a far lower point in a consumer's mind to make room for fresher and more relevant memories.

When a business isn't top-of-mind and cannot be recalled by a consumer when it comes time to make a purchase, a sale is lost to a competitor.

The Ebbinghaus study found that to stay at the top of the memory curve requires frequent exposure to the message.

According, however, to Erwin Ephron, the father of modern-day media planning, the more frequency, the better. "Today," said Mr. Ephron, "serious students of advertising understand there is no formula answer to the effective frequency question. They believe most exposures are reminders."

For SWFL small business owners anxious to reclaim a position at the top-of-the mind, advertising on local radio has proven to be the most powerful too.

Every week, more consumers are reached by Fort Myers radio than all other media. More than local TV. More than social media. More than Pandora and Spotify.  According to research from Nielsen, radio's reach has remained little changed during the Coronavirus current crisis. 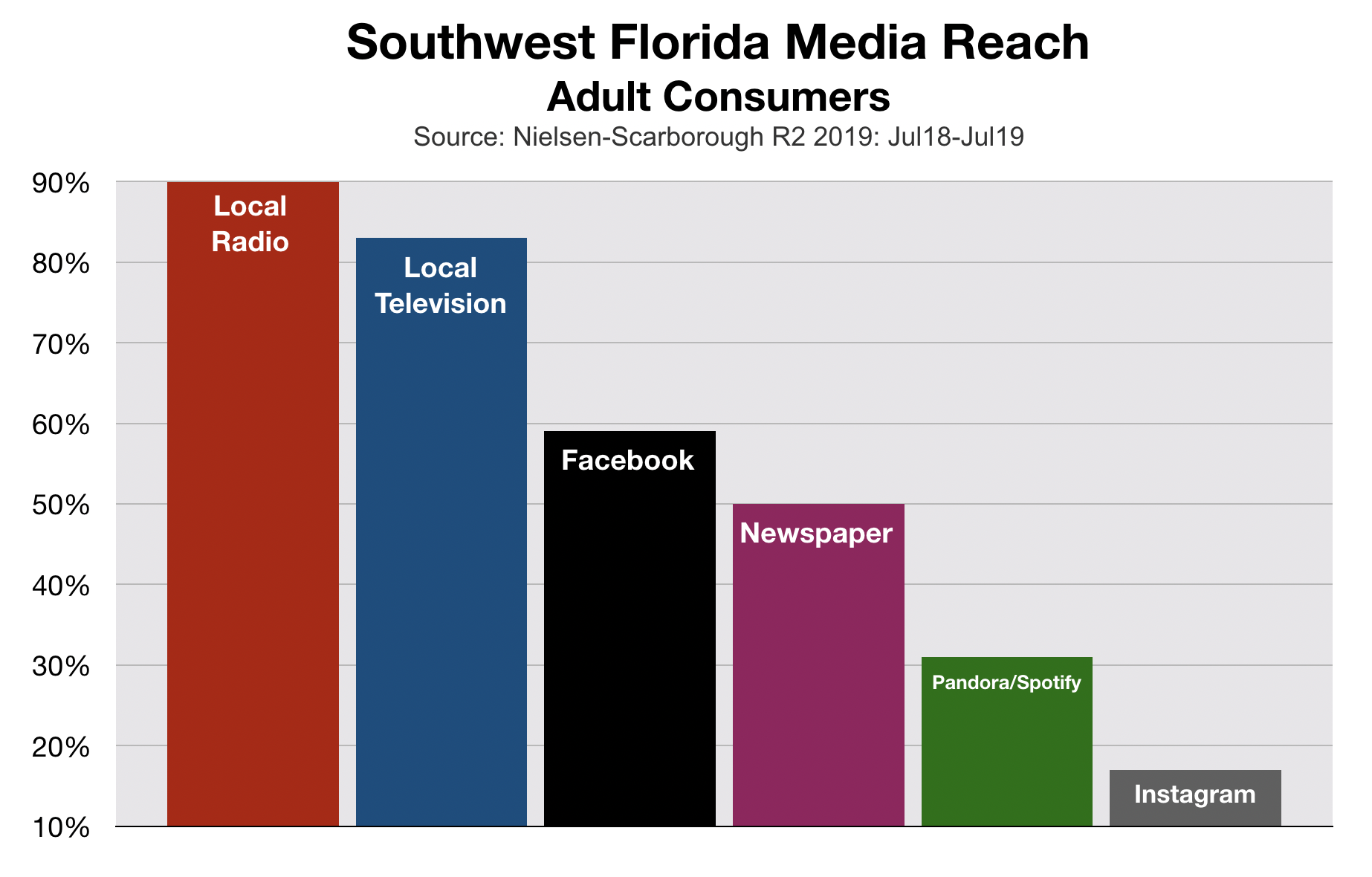 Additionally, Local Ad Recall, a research company that measures the effectiveness of advertising, found that brand recall was five times higher for companies that advertised on radio versus the companies that did not.

Consequently, Fort Myers-Naples business owners who advertise on radio have a much better chance of being recalled and, therefore, frequented by prospective customers than companies that do not advertise on radio.

A study by Nielsen, in fact, does indicate that when advertising on radio, higher levels of frequency create an exponentially greater lift to sales.

The study, conducted over three months, revealed that a radio advertising campaign conducted by an auto aftermarket retailer delivered $21 in increased sales for every $1 spent on commercials.

According to Westwood One, the company that commissioned the study, every exposure to the advertiser's commercial contributed to sales lift. The greatest lift derived from listeners who heard the retailer's commercial 7+ times.

Many advertising experts, including Mr. Ephron, believe simple repetition is not enough. Because, according to Ebbinghaus, recall plummets drastically after exposure, advertising can become most effective when exposure to a commercial occurs within close proximity to the time of purchase. Mr. Ephron referred to this phenomenon as "recency."

Another study reveals that radio advertising is the best tool SWFL small business owners have to achieve recency.

According to the study, radio’s ubiquitous in-car presence is such that more purchases are made within 30 minutes of radio listening than are made after tuning to satellite radio, streaming audio and downloaded music combined.

So, when it comes to being remembered by consumers who are ready to buy, the key for SWFL small business owners is frequency and recency. According to research, the more of both, the better.